Microsoft MSFT -0.74%’s recent behaviour is disappointing. In an attempt to drive more users to Windows 10, this week resorted to scaremongering about the ‘dangers’ of Windows 7. But why would Windows 7 holdouts upgrade when the company is now doing this to Windows 10…

‘Great Features’ and ‘Nasty Surprises’ are my regular columns investigating operating system updates for the best features / biggest problems hidden behind the headlines.

Hoping to increase its revenue from Windows 10, Microsoft is building advertising into two new parts of the operating system. This will debut in April with the massive ‘Creators Update’ (effectively Windows 10.2), and evidence can already be found in the betas…

Selling Apps
First up the Windows 10 Creators Update will tell you what apps it thinks you should be using. Alongside the apps you choose to install, Microsoft will now advertise additional apps in the share tool. This was picked up by Vitor Mikaelson on Twitter and since replicated by others: 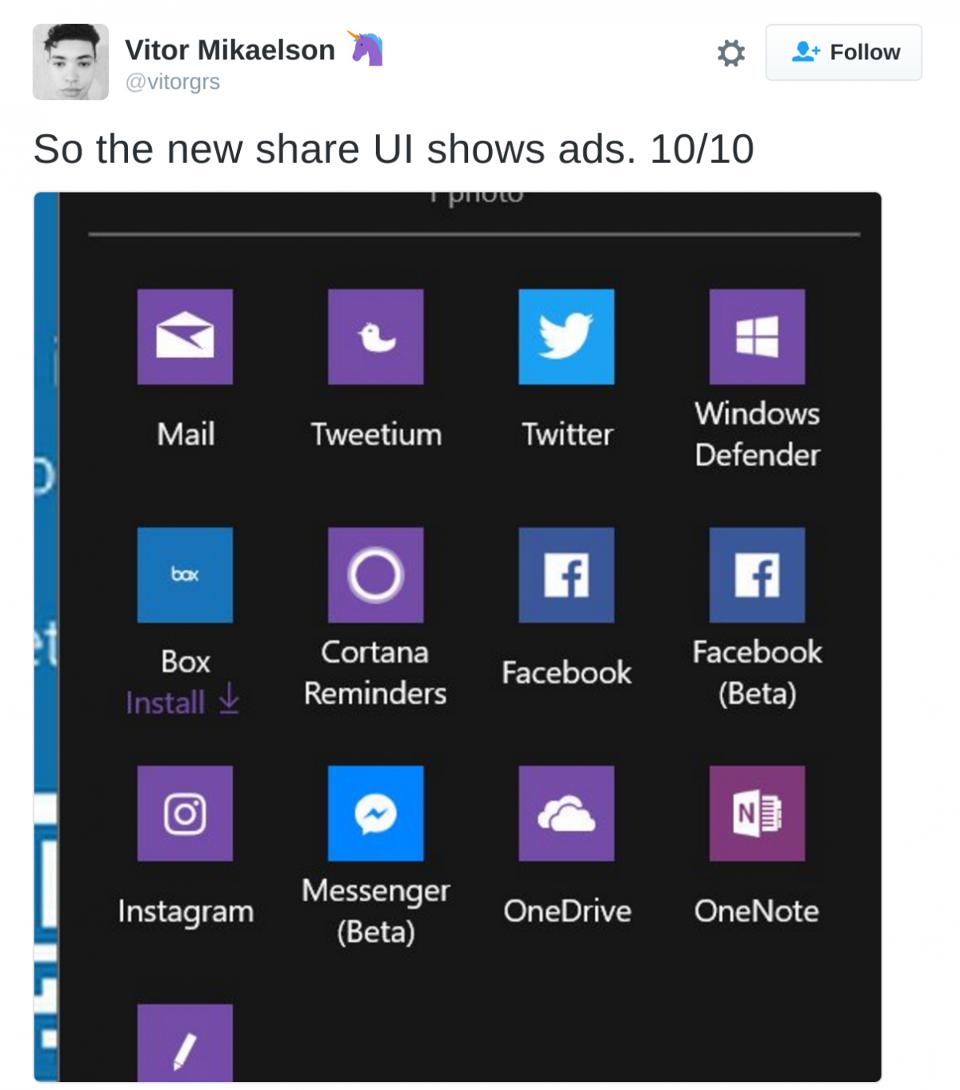 Looking at the screenshot above, Mikaelson says he has never used or had Box installed but Windows 10 clearly thinks he should. The inclusion of this subtle advert also moves around the grid position of existing share options making it less intuitive for users to quickly click their most used service.

Picked up by myce, the site gives the example of Windows 10 users who use Google Chrome. When Chrome is installed the latest Creators Update beta delivers pop-up advertisements on the Chrome icon in the Windows 10 taskbar. Here it is pushing Microsoft’s Personal Shopping Assistant:

At this stage the important thing to remember is the Creators Update remains in beta and Microsoft could still remove this ill-advised advertising, but there are already precedents in place. The Start menu and Lock screen are already used to promote Windows App Store content (though it can be switched off) as is the Windows Ink Workspace.

Of course the obvious comparison here is Google, which makes it clear you can use its services for free in exchange for providing anonymised data and seeing some ads. With Windows 10 also being a free upgrade for those who took advantage of the free upgrade offer, Microsoft could argue having the same arrangement is now perfectly fair.

But the difference is this is what Google users signed up to from day one while Windows has never been about integrated advertising. Furthermore will Microsoft still place adverts in Windows 10 for users who paid to upgrade and, if so, can they all be turned off? After all Google turns off ads for users of its paid G Suite productivity suite.

So this is the situation: Microsoft gave away hundreds of millions of copies of Windows 10 and it wants hundreds of millions more but in doing so this increases the pressure to monetise the platform. Right now the company seems to be experimenting on how to do so. We have the proliferation of ads as one route and a monthly charge (currently only for business users) as another.

But Microsoft needs to tread carefully. It recently ‘ended’ Windows 7 and Windows 8 and neither platform can be used on new hardware so, if it gets this wrong, disgruntled users will have little option but to go elsewhere…